The Origins of St. Andrew’s

St. Andrew’s Episcopal Church goes back to the mid-1930s, 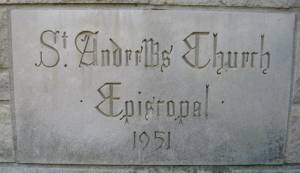 when a small group of DePauw University Prof. and Mrs. Laurel Turk, Prof. and Mrs. T. Carter Harrison and Mrs. Vera Cooper, the university librarian – shared with Bishop Francis their concern about the lack of an Episcopal church in Greencastle, particularly in view of the growing number of Episcopal students at DePauw. In February, 1938, Fr. John Nelson, the Diocesan Missioner, met in Greencastle with a larger group to discuss establishing a mission. On hand were townspeople and students, as well as faculty, and interest in the project was lively. Though no action was taken, the meeting closed with the service of Evening Prayer.

That was, in effect, the first service of the new congregation, since a few weeks later, Fr. Nelson began conducting Sunday services on a regular basis. For more than a year, these services were held in temporary locations. Yet history was made: in the YWCA room in old Speech Hall, the congregation selected a name for itself, St. Andrew’s – perhaps in contrast with the old St. John’s, Greencastle, disbanded thirty years earlier. It was here also, on Ash Wednesday, 1939, that St. Andrew’s enjoyed its first episcopal visitation from Bishop Kirchhoffer. And during that first year, the number of confirmed members doubled.

In the fall of 1939, the mission rented from DePauw, the old two-story white frame house, formerly the University infirmary, at 720 South Locust Street. Members of the congregation furnished the house as a church, and for the next twelve and a half years, with a painted sign in front declaring its name to passersby, that was St. Andrew’s Church.

Those were significant years for the internal life of the mission. A Women’s Auxiliary was organized, as well as a Church School. But the period was also notable for the way St. Andrew’s coped with World War II. Much of DePauw was taken over by V-5 and V-12 Navy units. In 1941, Mrs. Ann Rebecca Standring, evacuated from China after thirty-five years as an Episcopal missionary, was sent by Bishop Kirchhoffer to lead the Episcopal Youth Organization at St. Andrew’s and to live in the second floor apartment of the house. A tall, dignified lady, her appearance belied her gift for working with young people: under her guidance the mission became the semi-official chapel for the naval cadets housed nearby. Diocesan support for college work at St. Andrew’s dates from this time.

One of Mrs. Standring’s important contributions was continuity – a rare commodity by mid-1944, for none of the clergy assigned to the mission during the war stayed long. Mrs. Standring remained until July, 1946.  Another steadying influence was Fr. Chester Minton, who became acting vicar late in 1946 and remained for more than five years, seeing the mission through a key period of growth and consolidation. He was the first to hold regular Sunday morning services; but equally important, his leadership and experience were essential in the planning, funding, and construction of the present church building, which took place at this time.

Planning probably began in 1947, when the “chapel” in the Locust Street house was enlarged; the need for even ampler facilities was obvious to many. Discussion intensified when the desirable lot on which the church now stands became available. It was felt that the mission required an attractive structure to represent the Church near the DePauw campus. An approach was made to the Lilly Endowment for help in financing the project. With the application supported by Mr. Eli Lilly himself – who was interested because of his family’s ties with Greencastle a generous grant was obtained. The firm of Maquire and Shook did the design. The style is that of a Gothic English parish church, in stone and wood with lovely stained glass windows high behind the altar and at the opposite end of the nave, and a charming bell cote over a passage to the parish hall. Work was begun in 1951; the new church, its interior furnished through the labor and generosity of many members of the congregation, was dedicated in the fall of 1952.